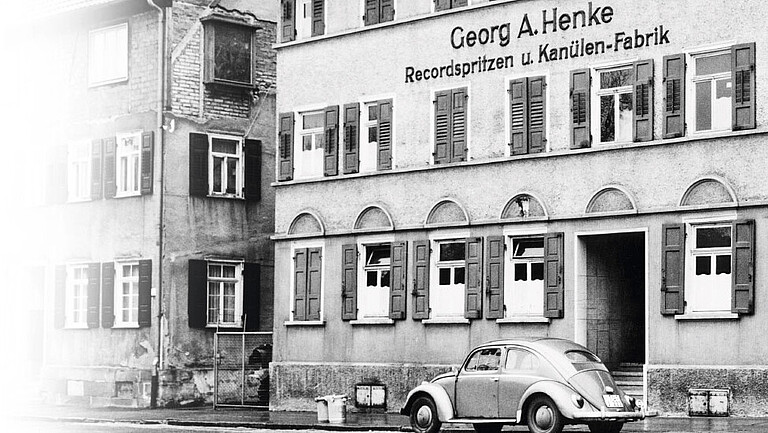 There is a story behind every success.

Get to know ours.

A story about vision, growth and character.

What began in a basement in Kaiserstraße in Tuttlingen more than a century ago is now at the very top of the medical technology sector. Henke Sass Wolf is the hidden champion from the south of Baden-Württemberg – a region that has earned a reputation for all of the "tinkering" and "accomplishment" that takes place there. These values are also reflected in our history. Just like our innovative spirit, our intuition and far-sighted decisions – the basis for our success for generations.

The Berlin-based company XION GmbH, which was founded in 1991, becomes a part of the Henke Sass Wolf Group in January 2019. This acquisition is a strategic milestone: With the know-how XION contributes in the field of endoscopic imaging, the Group can now offer solutions for the entire visualization chain. Thanks to the acquisition of XION, an additional 110 employees in the German capital's Pankow district are added to the HSW Group.

"Nolte & Grzeszik" is renamed and becomes "Henke Sass Wolf Mikrooptik GmbH." The move from Göttingen to the new building in Nörten-Hardenberg is completed and the company's 50th anniversary is celebrated.

With the strategic acquisition of Klaus Wenkert Medizintechnik GmbH, the Group keeps growing. The company, which is based in Seitingen-Oberflacht and has 50 employees, is a leading OEM manufacturer of urological and gynecological instruments – fields for which Henke Sass Wolf produces endoscopes.

Nolte & Grzeszik, the microoptics production of the HSW Group, has evolved into one of the most important innovators in the field of microoptics. With a new building, the production space for microoptics manufacturing is expanded to 4,500 m².

Kathrin McKenna and Nina Stackmann, the daughters of company owner Jochen Busch, join the company management and ensure the continuation of leadership in the future. The new company building of Henke Sass Wolf in Tuttlingen is completed. Cutting-edge, well-lit workspaces and a beautiful cafeteria were created in the Gänsäcker industrial park. The consolidation of the plant in Tuttlingen and the expansion to a total production space of 15,500 m² created beneficial synergies for the production process. The very positive growth of the business in the following years soon led to consideration whether a further expansion of the capacities would be needed.

The plant in Tuttlingen-Möhringen is expanded, which offers an opportunity for further growth.

With the acquisition of the leading microoptics manufacturer Nolte & Grzeszik, another area of technical expertise is added, which shores up innovation within the Group. As a wholly owned subsidiary of Henke Sass Wolf, the company manufactures lenses and optical components for endoscopes.

Henke Sass Wolf opens another plant in Poland (Henke Sass Wolf-Polska Sp. z o.o.). The objective is to be able to meet the economic requirements of the market in the long run. The benefits of a branch in Poland are also ideal for pursuing new opportunities on the Eastern European markets.

The plant in Tuttlingen-Möhringen opens its doors. It contains the state-of-the-art machinery for the production of high-quality medical technology components and instruments, especially for endoscopy, veterinary products and control and measurement technology.

The acquisition of Henke Sass Wolf by the current company owner Jochen Busch starts a new era. The modern alignment of the corporate structures and the consistent strategy to continue to focus on medical endoscopy as well as the production of syringes and cannulas energizes the company. Other parts of the current product range are developed.

Georg A. Henke retires. Because there is no successor, he sells the company to the US conglomerate Litton Industries.

Once again, Georg A. Henke has the right instinct for a future niche. He purchases the Berlin-based endoscopy manufacturer Sass-Wolf.

The factory in Kronenstraße in Tuttlingen is acquired. The headquarters of Henke Sass Wolf are located here until mid-2008. The building now houses the Campus Tuttlingen of HFU (Hochschule Furtwangen University), in whose booster club HSW is involved.

The first insulin product is launched in October 1923. The injectable drug begins its march toward dominating diabetes therapy. With his idea of "Manufacturing syringes and cannulas," Georg A. Henke bets on the right horse. The company keeps growing during the economic boom of the 1950s. At the start of the decade, it already has 170 employees.

Georg Andreas Henke founds the medical technology company. He manages the new business with skill, dedication and visionary entrepreneurship. The initial products are made in a small basement in Tuttlingen.